A Developer’s Guide to DevOps

Understanding the benefits and challenges of incorporating DevOps methodologies into your software development lifecycle (SDLC) can be a challenging, yet rewarding undertaking. Even though the practice has been around for quite some time, some developers may find the concept difficult to grasp and may be searching for answers as to the term’s definition, how exactly DevOps works in a development environment, and so on. With that in mind, this software development project management tutorial will discuss the challenges and tools used when incorporating DevOps into your team’s SDLC and development projects.

Now, you may be asking: if there is development management and operations management, why should we combine them? For what reasons? This is a fair question. As a developer, you are likely aware of the chronic headache establishing new software releases can cause. Part of that headache can stem from the occasional conflict and “world wars” that can occur between both development and operations teams when communication or understanding breaks down.

Traditionally, these conflicts are fairly common, not only in the IT realm, but also nearly in every industry that has a multidisciplinary environment, as to be expected.

DevOps is a modern approach to software development (and other project management needs) that includes a batch of policies, practices, tools, and even a whole culture that aims to tailor automation and combine them in the environment of various software development teams. It creates a new communication system through different specialization teams – namely, the development and operation teams. 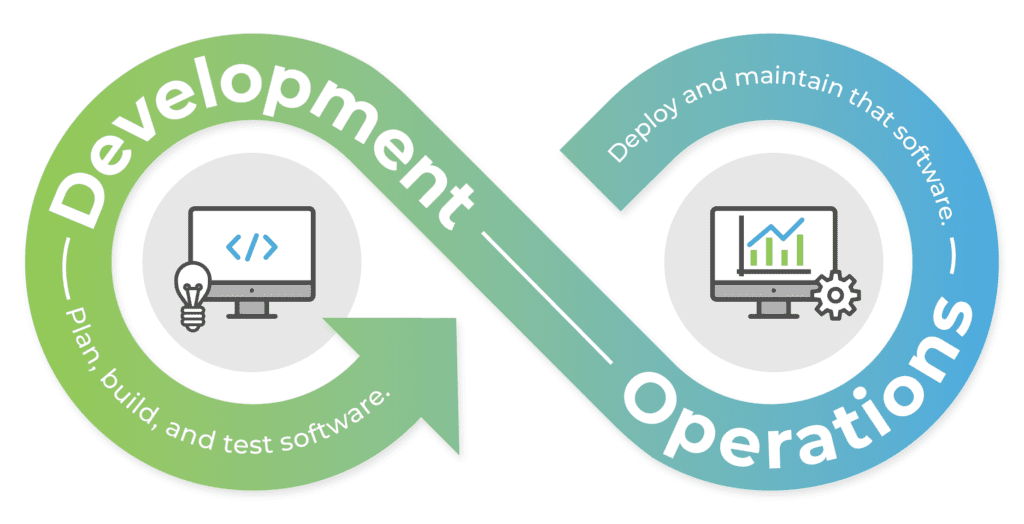 Simply put, it is just a term that combines the first parts of development and operations, ergo DevOps. But it goes more in-depth than merely making a new catchphrase. The idea behind the DevOps movement is to create a new professional culture that closely combines operations and development teams to achieve their goals smoothly and more efficiently and better deliver on software projects and products.

Traditionally, the development team is responsible for pushing out new application versions and services as fast as possible, while the operations team is tasked with maintaining the whole process agility. Sometimes during a new development cycle, both teams get conflicted and a roadblock occurs between developing innovations and the stiffness inherent in certain operations. The DevOps model seeks to fix this problem and speed up releases while also enhancing reliability and security.

How Does DevOps Work?

Before DevOps’s emergence in about 2007, issues began to accumulate for some in the developer community regarding the traditional software development model. The developers were responsible for writing code in isolation from operations, who were responsible for deploying the code. The process was slow and peppered by problems and misunderstandings.

DevOps creates a diverse team working collaboratively together, with a constant feedback cycle or loop, in order to reduce the product deployment lifecycle in addition to enhancing quality. You should not think of DevOps as technology or CI/CD, but as a communication system or methodology. It includes the following:

Culture changes to create a new team workflow between development and operations, combining the development and operations teams in one multidisciplinary team.
Empowers the team members with an in-depth, wide range of cross-disciplinary skills.
Uses automation tools for boosting the processes and increasing reliability.
Converts work into a continuous cycle of building, integration, and delivery.

Software and digitizing becomes a built-in part of almost every modern business at some point. As a result, the software development and delivery process also become irreplaceable in modern economics. Here we can realize the critical importance of DevOps in changing the world, even if it is just as a cultural shift example that can help some old ideologies take additional steps towards more democratic job environments.

Aside from office politics, DevOps can make a quantum leap in the SDLC in these aspects:

DevOps tools are chains for facilitating building DevOps cycles and teams. They help to implement more automation and to adopt DevOps faster. Some DevOps tools have features to enhance exploring errors and fixing them. Other tools have more quality additives like API testing, monitoring, feedback sharing, and infrastructure management.

The top ten most common DevOps tools for DevOps software teams include:

For more information about DevOps Tools and the different types, visit another site in our portfolio and read: What Is DevOps. Be sure to read the section, “Types of DevOps Tools”.

While we’re talking about DevOps features, cloud computing comes to mind, as the latest IT “champion of modernity” with many similar features and goals as DevOps. As you might imagine, DevOps and the Cloud can be very interconnected, especially cloud-based applications or cloud-native that are intertwined with DevOps as an underlying infrastructure as a domain of operations.

Modern cloud computing solutions make the DevOps model one of their essential services. Even in many different sections of software development, you can find DevOps as a backbone element, especially those that rely on the following elements:

Despite DevOps’s many benefits that make it seem ideal for development lifecycles, nothing exists without faults and challenges. In general, however, DevOps is considered by many better than traditional software programming approaches. Some of the common challenges of implementing DevOps can include:

Read: Transitioning to Microservices – Are You Ready?