Best Programming Languages to Learn in 2021 for Web Development

Best languages to learn in 2021 for Web Development

It might be a little redundant to specify that this article features languages employed in Web development since a lot of programming happens on that front these days. Nonetheless, if you’re looking to discover the latest and greatest way to build self-learning AI robots, you may or may not find it here. (Take a look at Go below.)

You don’t need to learn all of the programming languages presented here today; give them a try and decide which to add to your arsenal based on your requirements, aptitudes, and personal preferences.

Top Programming Languages at a Glance

Before we dive in, let’s get the lay of the land. Here were the top ten languages for 2020, according to a Gitpod poll: 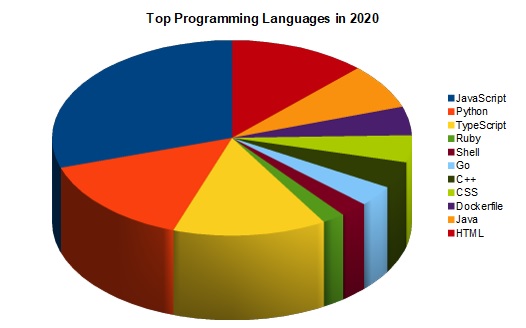 These may change as 2021 unfolds, but that’s what we’re going by here today.

Back when I was a junior developer, I can vividly recall consultants scoffing at JavaScript, stating that it wasn’t a “real” language and would soon be replaced by something better. Fast forward to the present day, and JavaScript is the most popular language for web development in the world! Since its inauspicious start as a means of providing interactivity to Netscape’s Mosaic web browser back in 1993, JavaScript is now utilized in both the front and back end (Nodejs) of web applications as well as in mobile applications (React Native).

JavaScript’s unrivaled success is due to a number of factors:

Although Python has been around since the early nineties, I have somehow never gotten around to using it myself. According to those who have experience with Python, it’s one of the most versatile programming languages around. In addition to web development, Python is well suited to Data Science, Scripting, and Automation applications as well. Similar to JavaScript, Python is considered to be an excellent language to learn coding, especially if you are new to software development.

Thanks to its massive popularity, Python enjoys huge community support and has a lot of useful frameworks, libraries, and tools that can help you create a web application quickly. For example, you can use Django to create full-stack web applications. If you want something even more “Pythonic” you can also use Flask, which touts itself as a minimalist web development framework.

Now TypeScript is a language that I do know, mostly due to my experience with Angular. Some people refer to it as JavaScript++ because it is an extension of JavaScript that enforces type-safety. The idea is that it helps catch potential bugs during compilation, which IDEs like VS Code do in the background while you code.

TypeScript 2.0 added the –strictNullChecks switch so that null and undefined values may only be assigned to variables that have been declared to accept them as values. In actual code, that would look like this:

The compiler also forces you to initialize variables at creation time or within the constructor. While such strict checks can be annoying while coding, they sure do help reduce the number of runtime bugs!

Yukihiro “Matz” Matsumoto created Ruby by blending parts of his favorite languages (Perl, Smalltalk, Eiffel, Ada, and Lisp) to form a new language that combined elements of functional and imperative programming. In his own words, Matsumoto was “trying to make Ruby natural, not simple,” in a way that mirrors life. Since he first released Ruby in 1995, it has grown to become one of the most popular and beloved languages for web development.

Beginners are drawn to Ruby because it has achieved a reputation for having one of the friendliest and most helpful user communities. Add to that a straightforward syntax, the amazing Ruby on Rails web application framework, and association to great tech businesses, including Twitter, Airbnb, Bloomberg, and Shopify, and it becomes abundantly clear why Ruby has become so ubiquitous.

Known as the little language that could, Go is really a low-level language that more closely resembles C and C++ than JavaScript or Ruby, without the difficult syntax and steep learning curve. Designed to run at blazing-fast speeds, it’s ideally suited to building web servers, data pipelines, and even machine-learning packages.

To act as a web server, Go relies on the net/HTTP package. Here’s the code to tells the HTTP package to handle all requests to the web root (“/”) with handler:

Of course, we can’t talk about web development without including HTML and CSS. Though not programming languages per se, they remain the backbone for web development and, as such, remain at the forefront of that field. Both have grown tremendously since the early days of the World Wide Web. HTML5 and CSS3 have both greatly contributed to the responsivity of the modern Web – especially when combined with JavaScript!

If you want to get in on front-end development in 2021, then you must master HTML5 and CSS3. The good news is that you can easily do that in a few weeks as they are relatively easy to learn.

And there you have it, the best languages to learn for web development in 2021! When evaluating popular languages, try not to get caught up in trends and fads. Go with those that have been around for a little while and have enjoyed a steady rise to the top of the heap. The last thing you want is to find yourself with a bunch of applications using a defunct language.

Rob Gravelle resides in Ottawa, Canada, and has been an IT guru for over 20 years. In that time, Rob has built systems for intelligence-related organizations such as Canada Border Services and various commercial businesses. In his spare time, Rob has become an accomplished music artist with several CDs and digital releases to his credit.

How to Print an Array in Java

An Introduction to The Lambda Architecture

Vercel, during its online Next.js Conf event today, revealed it has updated its development environment based on Next.js and the React frameworks to include...
Read more
Java

The Best Programming Languages to Learn in 2021

Whether you are a new or seasoned developer with decades of experience under your belt, your career could benefit greatly by learning one -...
Read more
JavaScript

Of all the Angular Material components, the MatDialog just may be the most complex. At the same time, it is probably also the most...
Read more