Introduction to Machine Learning in Python

Today, analytics is at the head of innovation. From fighting global pandemics to managing businesses, it drives growth and optimization everywhere.

In the past, tools like Microsoft Office 365’s Excel popularized the use of data and simplified data analysis for everyone. Now, leveraging data has become essential in every field, to the point that simple data analysis is no longer enough.

Data often has underlying patterns. Patterns that are impossible to detect using Excel charts alone. We need tools that can analyze data in depth and identify hidden relationships within. This is where machine learning helps us. What’s machine learning, you ask? Well, that is exactly what we will discuss today.

Thanks to Python, this no longer has to be the case. Python is a fast, robust, and easy to learn programming language used by data scientists all over the world. It has a rich collection of libraries that allow you to implement machine learning algorithms. Interestingly, you can use these algorithms without diving into the statistical quagmire underneath.

What is Machine Learning?

In theory, machine learning is a subset of computer science that uses data and algorithms to mimic the way humans learn. You see, computers are not like humans. They can only do what we explicitly program them to do.

Although machine learning is extremely useful in the modern world, it can’t teach computers to behave as humans do. Your computer can’t learn to dribble with a soccer ball while also learning to play chess.

A machine learning algorithm only trains a program to tackle one practical problem at a time. In most cases, this problem is studying, analyzing, and finding patterns in large amounts of data.

How we process data in machine learning depends upon the type of data we are analyzing. There are two types of data: structured and unstructured. Let’s discuss structured data first.

Structured data is usually stored in structures such as Excel sheets, tables, or databases. We can easily map it into designated fields. It consists of information like names, zip codes, phone numbers, bank balances, or other data.

Think of data collected during surveys. The response to each question in a survey is saved separately in columns. Each survey respondent acts as a row, whereas every question serves as the column for the dataset. In machine learning, each column is known as a separate ‘feature’.

Data from the 2017 Developer Survey is a great example of structured data. The dataset has several columns, including Respondent, Professional, ProgramHobby, and Country. Each of these columns represents a question asked during the survey.

For instance, in the ‘Professional’ column, the respondents answered if they coded professionally. Likewise, ProgramHobby shows whether a respondent programs as a hobby or not. Each column is essential for analysis as it provides us with a unique bit of information.

The vast majority of data we generate is unstructured with Forbes estimating it to be up to 90%. Social media and websites, emails, mobile and communications, text files, and media are the primary sources of unstructured data. In other words, unstructured data can be a combination of anything from web pages, emails, and text messages to text data, audio, and video.

Because unstructured data exists in several formats, it’s hard for traditional software to ingest, process, and analyze it. Most tools can only perform simple content searches across textual data, and nothing else. This is why we need different machine learning techniques for structured and unstructured data.

There are three main types of machine learning: supervised, unsupervised, and reinforcement learning.

Supervised learning is a unique approach to machine learning that uses structured data for training. The algorithm’s job is to learn the ‘common theme’ inside data. After identifying this ‘theme’ or pattern, the supervised algorithm uses it as a reference for future predictions.

The supervised algorithm first learns what’s common amongst people who clicked the ad and what’s common between people who didn’t. After analyzing the dataset and the output variable, the algorithm will classify the audience into two or more categories.

Similarly, in a survey asking people their preference for tea or coffee, the output variable has three values. People who prefer tea, those who like coffee, and those who drink neither of them.

One estimate says 84% of Britain’s population consumes tea every day. Considering the supervised algorithm uses the same data, it will classify around 84% of people as tea drinkers. People who drink coffee or neither of the beverages will be classified into separate categories. The algorithm relies heavily on the training data.

On the other hand, in a regression problem, the output variable isn’t a collection of categories, but a single continuous value. Imagine that your rich uncle has invested in a house and wants to learn how its price will change in two years. A supervised regression algorithm is perfect for estimating the future house price. All it needs is the historical data of the neighborhood.

Unsupervised learning algorithms process unstructured data. They can discover the differences and similarities between sets of data, making it easier to identify data groupings and hidden patterns without manual intervention.

Imagine an outbreak of Avian flu has spread in your local district. You have a dataset enlisting all the pets registered in the district. An unsupervised algorithm will analyze the dataset and break it down into separate clusters.

Residents who own cats, dogs, turtles, snakes, rabbits, birds, etc. will be separated into different clusters. This will make it easier to identify which residents currently own a bird, allowing you to inform them about the ongoing outbreak. The algorithm will help residents take necessary precautions on time.

Reinforcement learning is a system of algorithms where we use a feedback loop during training. Algorithms leverage rewards, penalties, and estimated errors to make more accurate decisions. This type of learning is most popular for training robots.

Today, we will implement a fundamental supervised learning algorithm in Python called Logistic Regression. It’s fast and somewhat uncomplicated, so it’s great for anyone who wants to understand machine learning.

We will use the Iris Species dataset on Kaggle to implement Logistic Regression.

The Iris dataset is extracted from the British statistician, eugenicist, and biologist, Ronald Fisher’s 1936 paper.

A Look into Data for Logistics Regression

All four of these variables influence what species of plant the Iris flower will be. The Species column is the output variable or label. 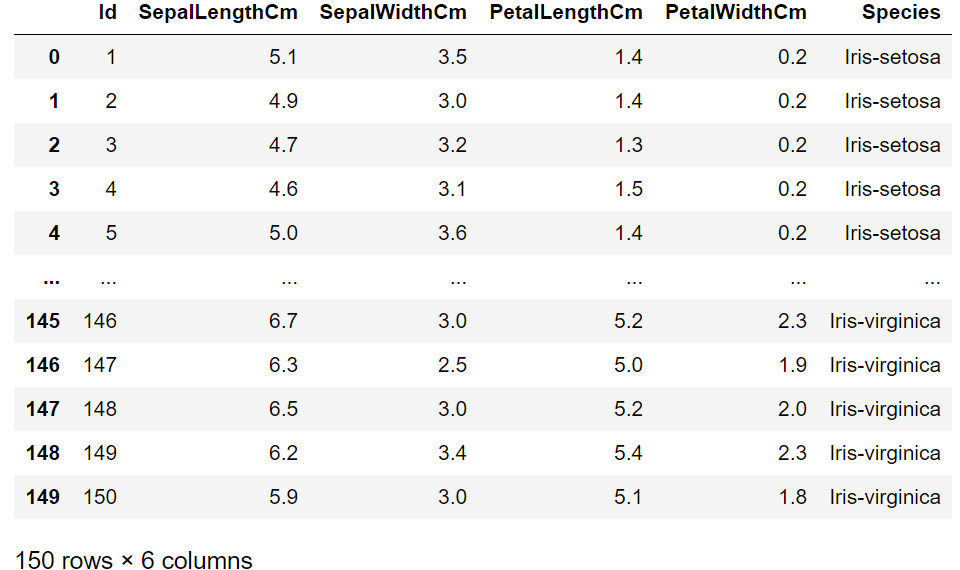 This is the DataFrame of the Iris dataset

Divide the Data into Features and Labels

Just to recall, the columns of a dataset are known as features; they are independent variables. On the other hand, the output variable is known as the label and it is dependent on the features. After saving the data on the DataFrame, we will divide it into features and labels. These are the first 15 values of the training and test set.

During training, machine learning models get familiar with data. When we introduce the same data again, it starts making perfect predictions. However, the model’s accuracy plummets when we introduce new data. Splitting data into training and test sets helps us test the model’s performance on new data.

Standardization is an important step in machine learning that helps us improve the model’s performance. For now, don’t worry about how it works (we will cover it later). We will scale the values in every feature between -1 and 1.

This process is so important that some machine learning models don’t work without standardization. Logistic regression is one such model. 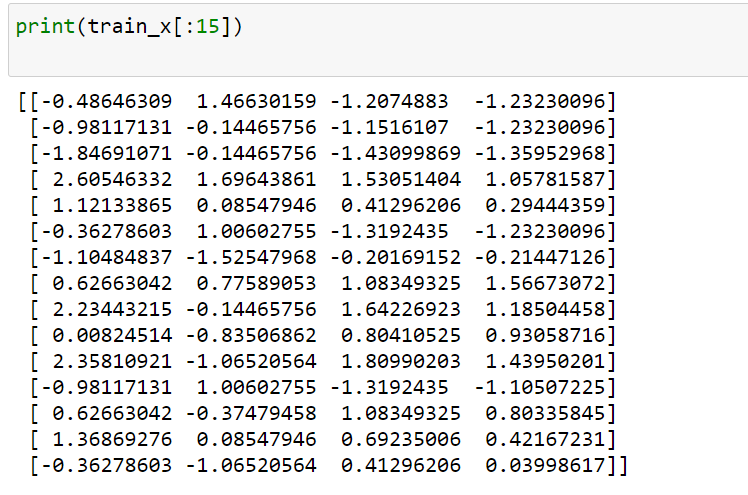 The first scaled values of the Features training set. All values are scaled between -1 and 1

Lastly, we will implement the logistic regression model for a multiclass problem:

Now for the final step.

Analyzing Results of the Logistic Regression Model in Python

Yes! We achieved an accuracy score of 0.9111, which means it predicts the right value 91.11% of the time. Congratulations on completing your first machine learning project!