The battle for the most popular programming language continues to rage as new languages such as Kotlin, Go, and Swift enter the arena, ready for battle. While these new codebases are gaining traction, the old standbys not only hold their place at the top of the mountain but continue to rise in popularity as well. Two of these languages – Java and Python – are in a constant war for second and third place, swapping positions every other month.

What makes these two languages a favorite amongst developers? Which one is better, and how do they continue to be so widely used decades after arriving on the programming scene? What are the benefits of Python over Java and vice versa? We look at these very topics and showcase some code examples of each in today’s programming tutorial.

What Are the Most Popular Programming Languages in 2021?

While it is impossible to say which programming languages are the most popular in 2021 definitively, we can use certain indicators to give us an idea about which languages are used the most. Taking a look at Google Insights to see trends on keyword search for programming languages is one method. Another is to view the monthly Tiobe Index, which looks at the number of software engineers worldwide, courses offered in different languages, and other metrics to determine language popularity. Other sources, such as viewing GitHub repositories based on the language used and other state-of-the-Developer studies, provide additional insight.

According to the Tiobe Index, the top ten programming languages of 2021 are:

If you look at the historical data, you will note that Java has managed to dethrone C several times over the course of the past two decades, as illustrated in the chart below. Again, however, it should be noted that this data is not absolute. There are many other accounts that claim JavaScript and Python, as an example, are the most known languages in the world. 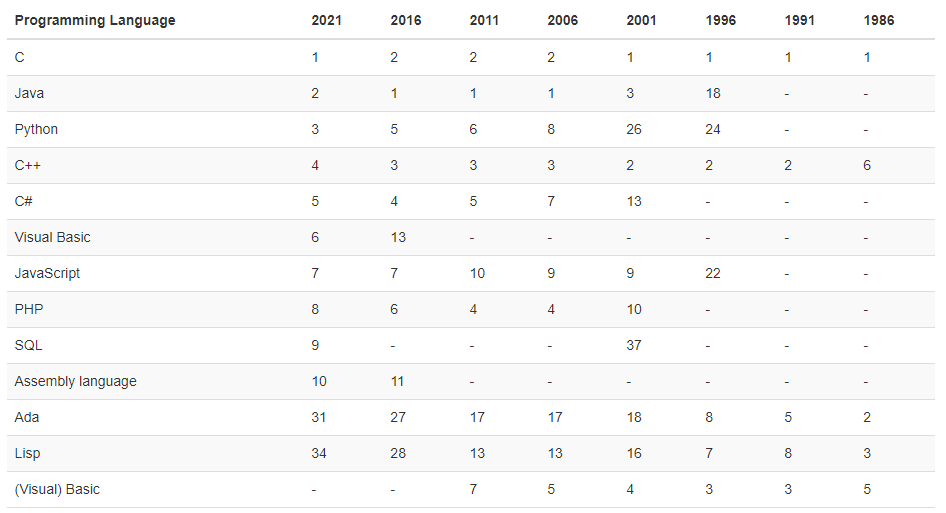 That being said, the Tiobe Index list of top programming languages does align with most opinions regarding the most popular languages across the globe.

What is the Python Programming Language?

Python is a high-level, interpreted, object-oriented programming (OOP) language. Its syntax is similar to human speech, making it incredibly easy to read, understand, and learn. It is highly extensible, meaning you can blend it with other programming languages, including Java, Jython (a blend of Python and Java), C, and many more. Python can be used to create applications in a vast arena of fields, including:

What are the Benefits of Python?

The Python programming language offers the following benefits to developers of all skill levels – whether you are a new developer or a veteran software engineer.

Read: Why is Python So Popular?

Easy to Learn and Easy Readability

Python is one of the easiest languages to learn, thanks to its English-like syntax. Because of this, it is great for beginning programmers wanting to get a start in the industry as quickly as possible while also learning a powerful, flexible programming language. In addition, since it is so easy to learn, it is also the perfect language for seasoned developers looking to add more languages to their resume and a great addition for system admins that want to automate common tasks without needing to learn a more difficult language.

The readability aspect also helps developers hunt down code, as the language is easier to understand when reading. The simplicity of the language also makes it more efficient and less error-prone, as again, the syntax is fairly easy to understand even for beginners. The efficiency portion comes from the fact that it takes fewer lines of code to achieve a task in Python than it does in other competing languages, such as Java, C, and C++.

Python is an interpreted programming language. This means that Python code is directly executed, line by line. This is handy because once Python encounters an error, it ceases execution of the program and lets the developer know what error (and where) has occurred. Interpreted languages rely on a separate program known as an interpreter to read and execute code. Because an interpreter executes source code itself, it makes the code platform-independent versus compiled code. Interpreted languages such as Python also tend to be smaller in size and less resource-intensive. Finally, interpreted programming languages are also easier to debug or find errors in than their compiled counterparts.

Thanks to its simplistic syntax, Python makes developers highly productive. Not only can they achieve tasks with fewer lines of code (as noted above), but they can also troubleshoot, debug, and find errors much faster in Python than they could in, say, C++ or C. Programming logic is also more straightforward, which makes it easier for development teams to understand each other’s code when it comes to maintaining and adding features as well.

Because of its popularity, Python has a large community to network with. This is helpful for finding jobs and also for finding help and support when a developer runs into a problem they cannot solve. This large community is also helpful because it comes with a huge repository of libraries you can add to your Python installation and call within your programs. Libraries are essentially snippets of code that tackle commonly coded tasks that make it, so developers do not have to repeatedly type basic program elements over and over again. For instance, instead of creating entire blocks of code to generate random words or characters, you could install the random module and use its built-in methods – saving you a ton of time and reducing the likelihood of human error as you enter in all of that code.

All told, there are well over 300,000 libraries you can obtain from the PyPi (Python Package Index) repository.

One final note: Python also has a ton of built-in libraries, so odds are you might never even need to delve into PyPi. But it is good to have it at hand if you ever need to extend your programs.

Python runs behind the idea of “write once, run anywhere.” That means that Python is not platform-specific; you can run your Python code and applications on any system. Some programming languages are not platform-independent, so you have to make different codebases for each Operating System (OS) or system that you want your applications to run on.

Python is Open Source, meaning that it is free to use and distribute. In fact, you could down the Python source code, change it to your liking, and have your own version of Python to develop your apps in.

The average salary for a Python developer in the United States is around $105,000, not including bonuses and benefits.

Java is a high-level, general-purpose programming language that is class-based. It is often considered an object-oriented programming (OOP) language, but in truth, it is not because it supports primitive data types such as byte and long; in real OOP languages, data types are objects. Because of this difference, and because Java is class-based, it is often confused as an OOP language versus one that shares elements of object-oriented programming.

Java is based on the WORA philosophy (Write Once, Run Anywhere) like Python. It uses the Java Virtual Machine (JVM) to compile its code, which makes it portable and able to run on any computer architecture, regardless of the Operating System. The language was originally created by James Gosling during his time at Sun Microsystems, which was later acquired by Oracle, which maintains the language today. It is currently in its 16th iteration, known as Java 16.

Java can be used for many purposes and to create many types of software, including:

What are the Benefits of the Java Programming Language?

Below you can find some of the many benefits of using the Java programming language, which accounts for its decades-long popularity.

Java is Object-Oriented (Sort of)

As noted, thanks to the JVM, Java is platform-independent, meaning it can run on any machine, from the source level as well as the binary levels. While not so uncommon these days, the advent of the Java Virtual Machine helped propel Java as one of the top programming languages in the world.

Java has been around for a very long time and, as such, has had a lot of time to evolve and become entrenched in the marketplace. Because of that, Java is not going anywhere any time soon. It also ensures that you will be able to find a job fairly easily if you code in the language. There has also been decades worth of support for the language, meaning it is less buggy and more secure than newer programming languages.

There are also a ton of resources available to learn Java, as well as forums and other places to go if you run into a problem or cannot figure out how to code something. This is one of the most important features to look for in any programming language you are looking to make your primary coding language.

Java is distributed, meaning that it can work alongside other computers on a network, sharing resources, accepting and distributing data, and enhance functionality and performance.

Finally, a great feature of Java is its ability to handle multithreading. Multithreading is a process whereby an application or processor is able to perform multiple tasks at once versus one at a time. This increases efficiency, opens up resources, and helps performance.

There is no shortage of career opportunities when it comes to Java, as you might imagine; being the number two language has its benefits after all. You can find a career in almost every area of software development, including Java jobs and roles that entail:

and many more. The average salary for a Java developer is $101,000 per year plus benefits and bonuses. This, of course, can vary depending on the position and level of experience.

What is the Difference Between Python and Java?

Below you can find a brief list of the difference between the Java and Python programming languages.

Java is a strictly typed language, following strict rules when it comes to how a developer codes. More accurately, Java is statically typed, meaning programmers have to explicitly declare variable types. Blocks in Java have to be defined within curly brackets. If an error occurs in code, Java programs won’t run at all, so you have to be very careful to follow syntactical rules.

Python is more forgiving than Java and more readable. You do not need to explicitly declare variable data types – they are, instead, input at runtime. There are fewer rules in Python, which is dynamically typed, which makes it an easier language to learn to develop programs in.

Java is technically more stable than Python. This has to do with the fact that Python syntax is tested at runtime. Java, on the other hand, requires that all code be reviewed and working prior to running. Because of this difference, Java is usually tested better and far less prone to code crashes or issues than Python.

Defining a Variable in Python versus Java Variable Declaration

Below you can see the difference between the two languages, as we showcase how to define a variable in each language. While a simple task, it shows, in short method, how different the two languages really are.

Here is some sample code showing how to define variables in Python:

On the flip side, here is some sample code showing how to define variables in Java:

As you can see, Python takes just three lines to define two variables. Java, meanwhile, takes six lines (not including the comment) to achieve the same result. Also, a developer has to remember proper indentation, placement of curly brackets and semicolons, making Java more prone to user errors.

A Simple Guide to File Handling in Python

A Simple Guide to File Handling in Python

How to use pointers in Go