Java is a typed language, which essentially means that every variable declared has a certain type associated with it. This type determines the value it can store. For example, an integer type can store non fractional numbers. Also called a data type, this can grossly be divided into two categories: primitive and reference. Primitive types are the most common and form the basis of type declaration and reference types are those which are not primitive types. More on these reference types later in this programming tutorial; but first, a slight detour.

Looking to learn Java in a class or online course environment? Check out our list of the Top Online Courses to Learn Java to help get you started.

What are Static and Dynamic Types in Java?

A language is considered statically typed if the type of a variable declared is known prior to the compilation of code. For some languages, this typically means that the programmer needs to specify the type of the variable in code before using it (eg – Java, C, C++). Others offer a form of type inference that is able to deduce the type of a variable (eg – Kotlin, Scala, Haskell). The advantage of explicit type declaration is that trivial bugs are quickly caught in the early stages.

Dynamic typing, on the other hand, means programmers do not need to declare any type of variable and can just start using them. The type is decided dynamically according to the value it stores. This is a quicker way to code because a variable can store different types of values – for example, numbers and strings – without having to bother with their type declaration (eg – Perl, Ruby, Python, PHP, JavaScript). The type is decided on the go. Most scripting languages have this feature, primarily because there is no compiler to do static type-checking in any case. However, it makes finding a bug a bit difficult, especially if it is a big program, despite the fact that this type of script typically has smaller code, so bugs have fewer places to hide.

There are languages (such as Rascal) that adopt both approaches (static and dynamic). Interestingly, Java 10 has introduced the var keywords. A variable declared as var automatically detects its type according to the value it stores. However, note that, once assigned a value, the compiler designates its type during compilation. Later they are not reusable with another type down the line of code. Here is an example of how to use the var keyword in Java:

What is the Difference Between a Primitive Type and Reference Type in Java?

Some characteristics of reference types are as follows:

Addresses of Variable and Reference Types in Java

Unlike C/C++ where we can get a close look at the memory addresses of a variable and references through pointers, Java is completely silent here. There is no element in the Java language that enables one to get the address of a variable. This is the reason there is no such thing as address-of or a similar operator in the language construct; the language, from the ground up, is designed to work without it. This completely closes the door for pointers in Java.

In Java, an interface cannot be instantiated. Therefore, it cannot be referenced directly. However, an object of class type, which extends the interface, can be used to assign a reference of that interface type. In the following example, a Professor is derived not only from the Person class, but also from the two interfaces: Teacher and Researcher.

Therefore, according to the statement, the following hierarchy is valid:

As such, the following Java code example will compile just fine: 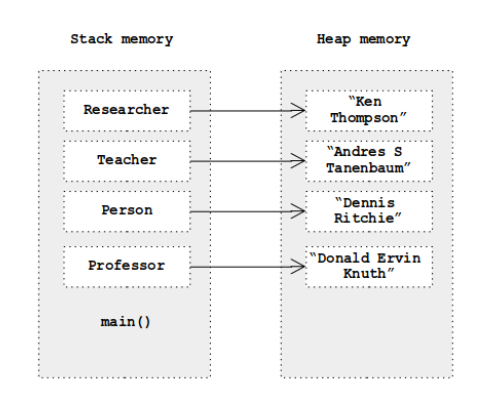 In such a case, the stack and heap memory would look something like this where one object has multiple references: 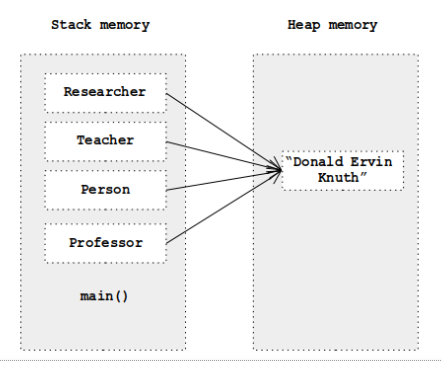 But, note that the references must be super types of an assigned object. This means that the following assignment is not valid (and will not compile):

The reason for this is that references are used to call the public methods declared within the class. Therefore, the object that the reference is pointing to must be able to access those methods. Here, the reference professor cannot access a person’s property. As a result, the Java compiler complains about the assignment. Some smart code editors and IDEs are also able to scent the invalidity and flag a message and warn programmers prior to compilation.

One can, however, use explicit conversion to convince the compiler that everything is just fine:

Reference type instances are by default initialized to value null. The null is a reserved keyword in Java which means that the reference type points to nothing in the memory. One aspect of not having pointers in Java is that reference types can almost be treated just like any other variable in most cases. Pointers have a strange look which many programmers dislike for exactly that reason (some however like it anyway). Lay programmer’s hand off the memory and still have a reference to point to objects in memory – you get Java reference types.