How to Develop Games in Unreal Engine

Unreal Engine is a popular and widely used game engine developed by Epic Games. Many AAA modern games such as Fortnite, Rocket League, and Star Wars Jedi: Fallen Order were made with this game engine. Very big game studios, whose name we hear often, use the Unreal Engine game engine. In addition, not only the gaming industry but also the architecture and cinema industry often benefit from the graphics power of Unreal Engine.

Unreal Engine 5 was announced a while ago. However, this version is currently in the trial phase. That’s why we’ll be using the Unreal Engine 4.27.0 version in our examples in this guide.

Why Develop Games in Unreal Engine?

With Unreal Engine, you can develop projects for many environments, including PC, PlayStation, XBox, Nintendo Switch, iOS, and Android. Unreal Engine is used a lot in the gaming industry as it provides flexibility to work between different platforms.

Incorporating powerful capabilities for complex scenes and effects, Unreal Engine is a great game engine for artists. Using all these features can be daunting at first glance. However, you can master this game engine in a short time by changing the parameters until you find what you are looking for.

Of course, most importantly, you can have all of these for free. The biggest advantage of Unreal Engine is that it is completely free to use. Whether you’re a hobby game developer or own a great AAA game development studio, Unreal Engine won’t charge you anything. Instead, they only charge 5% of your earnings from your games.

Unreal Engine also has great tools that make building for virtual or augmented reality super easy. VR technology has improved a lot in recent years. Therefore, you can easily produce content for platforms like Oculus Rift and HTC Vive.

Unreal Engine uses the widely accepted PBR (Physically based rendering) workflow for material and rendering capabilities. In this way, you can create photorealistic views in real-time. In addition, realism can be kept at the highest level with Raytracing technology.

Now that we have learned a little about the amazing powers of Unreal Engine, let’s enter the powerful world of video game programming together.

How to Install Unreal Engine

Unreal Engine has some specific hardware and software requirements. First, let’s take a look at what these system requirements are.

Below are some software and hardware requirements for installing Unreal Game Engine:

These are some of the hardware features you will need to start the engine. In order to develop games with Unreal Engine, you also need to have some software features, including:

Unreal Engine is installed with various DirectX components and Visual C++ packages. When you install Unreal Engine through the Epic Games Launcher, the Launcher automatically installs these necessary packages for you.

Now we can proceed to the installation process.

Epic Games Launcher is a great tool for downloading and installing games, assets, and the Unreal Engine game engine from the Epic Store.

To install this Launcher you need to follow the steps below:

During the download process, you may receive warnings such as security approvals and administrator permission. These are warnings that will vary depending on your operating system. You don’t need to worry; grant the necessary permissions and continue. At the same time, Unreal Engine can install this and other similar programs, such as DirectX.

Epic Games supports many different register types. You can sign up with any of these options. 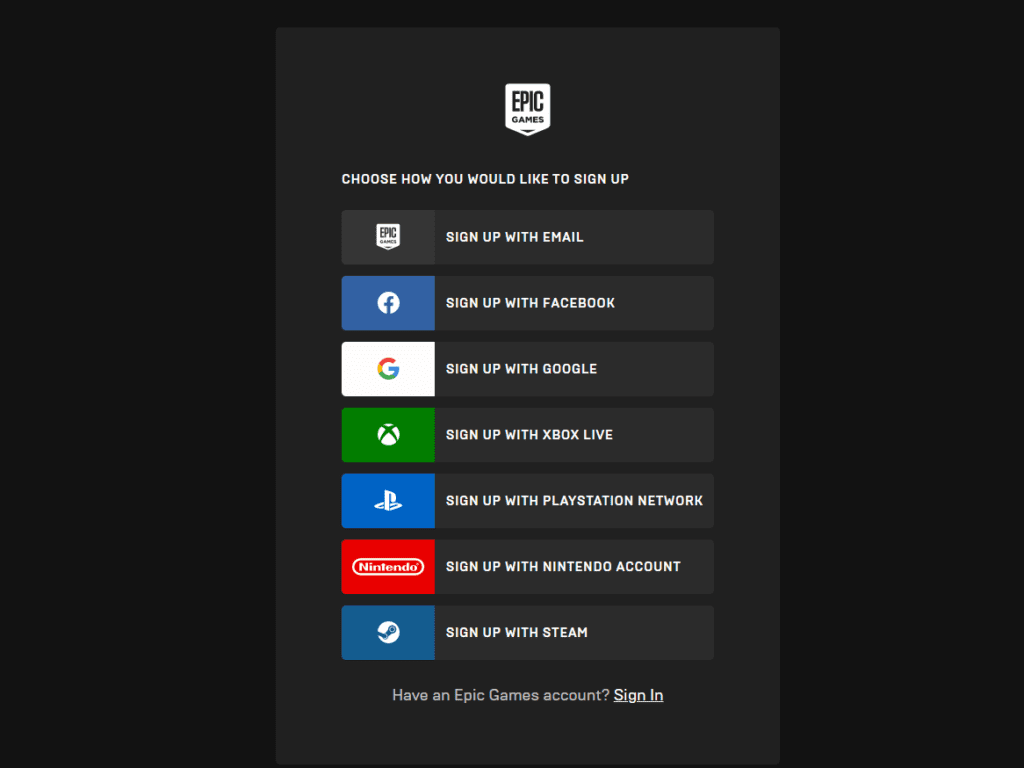 How to Create Projects with Unreal Engine

For Unreal Engine project creation, first of all, you need to open the program by clicking the “Launch” option from the part you can see from the picture.

After the game engine is opened, an interface will appear as in the picture. As we mentioned, Unreal Engine is not just used for game development. If you are interested in other industries besides game development, you can also explore other options. However, we will speak for this area as we are concentrating on game development.

Here, you can select “Games” for the game project and click “Next”. 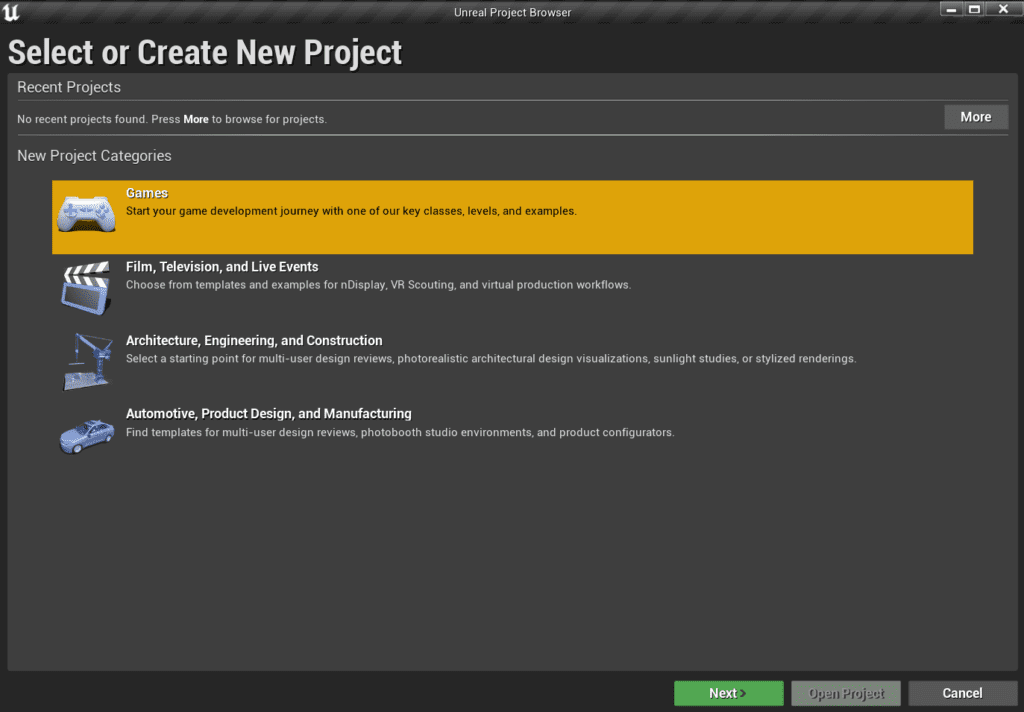 On the next page, Unreal Engine will present you with many ready-made projects. You can do everything yourself by creating an empty project from here, or you can choose the project that suits you in order to do some of your work faster. After selecting the appropriate project, you can proceed to the next step by clicking the “Next” button. 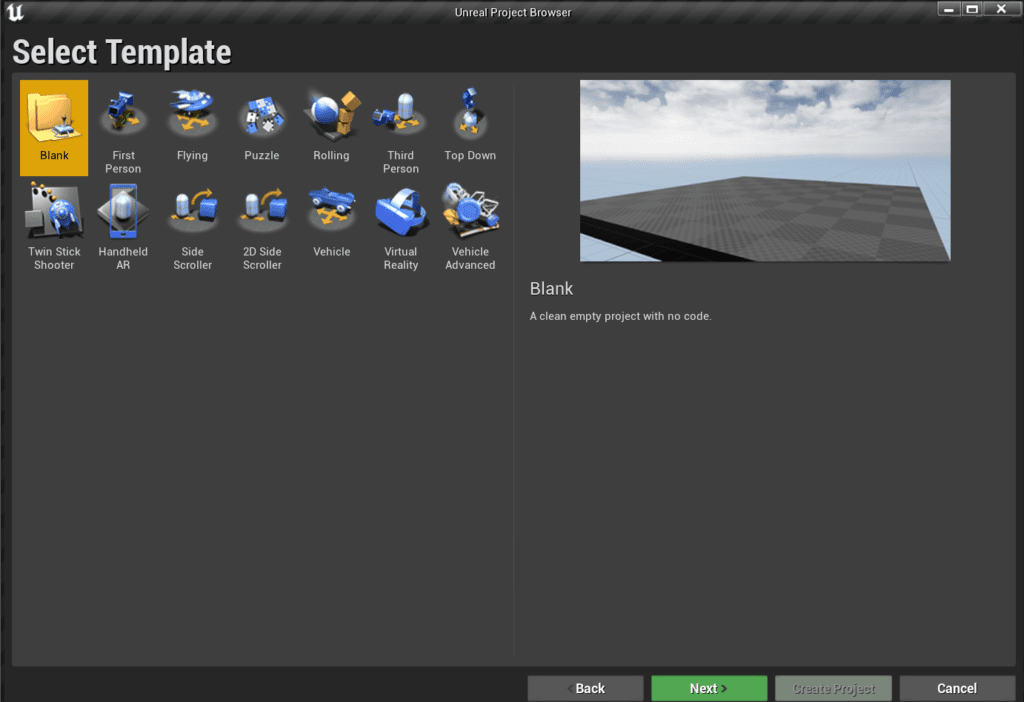 This last page contains some important details. In the script feature we will use, you can choose whether you want Blueprint or C++. From this page, you can choose the graphics option you want, the Raytracing feature, your target platform, and whether to start with the starter content.

If you do not trust the power of your graphics card, you do not have to choose Raytracing and Maximum Quality options. This will affect your Unreal Engine performance. 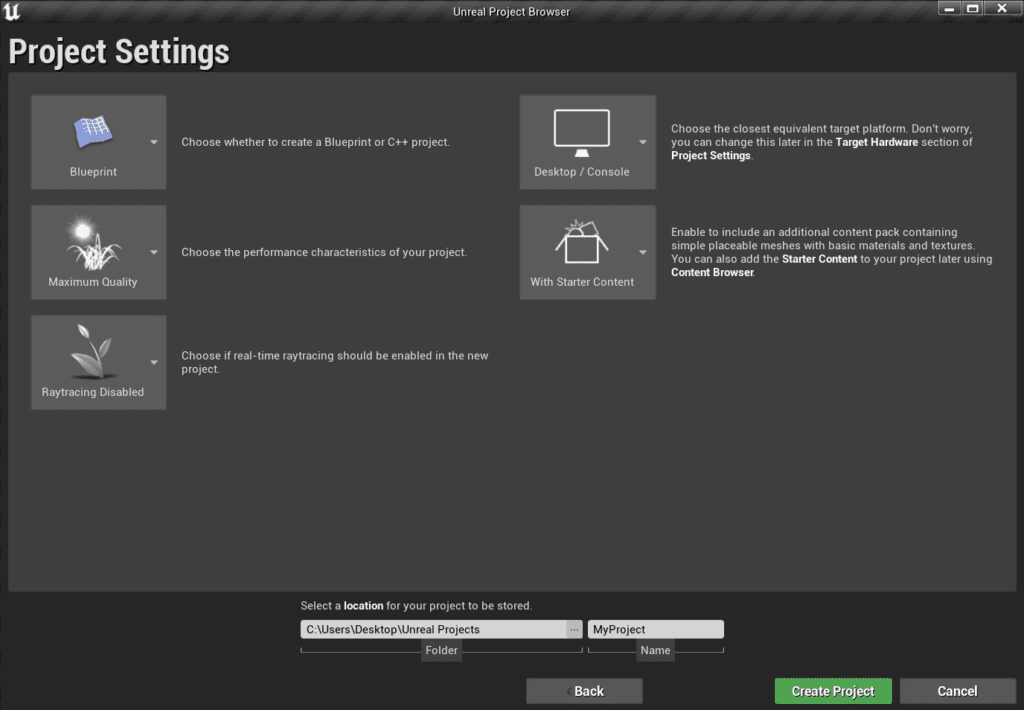 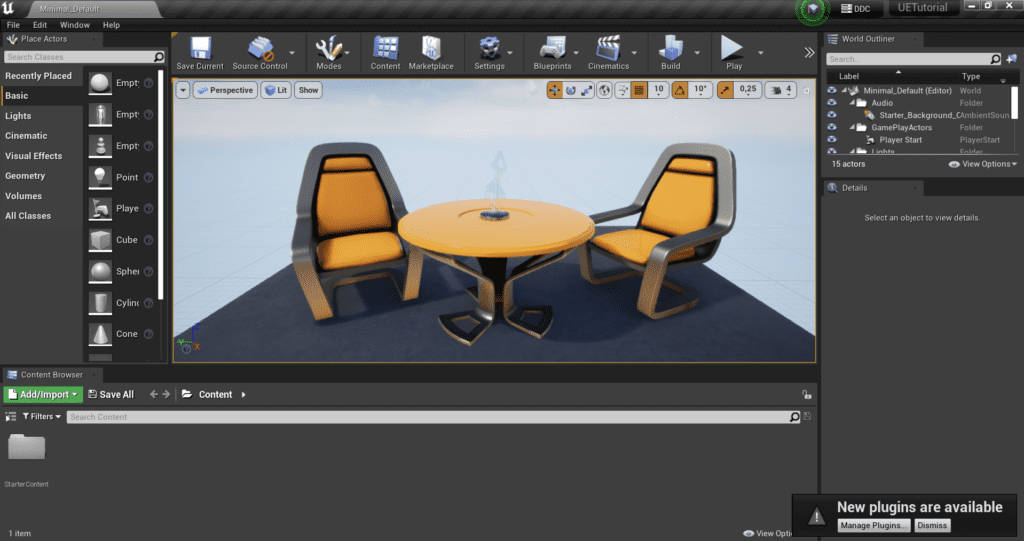 Introducing Unreal Engine’s powerful and useful interface. Here you can manage every file, material, and object of your project.

You can customize the Unreal Engine interface as you wish. For simplicity, we will focus on the default interface. 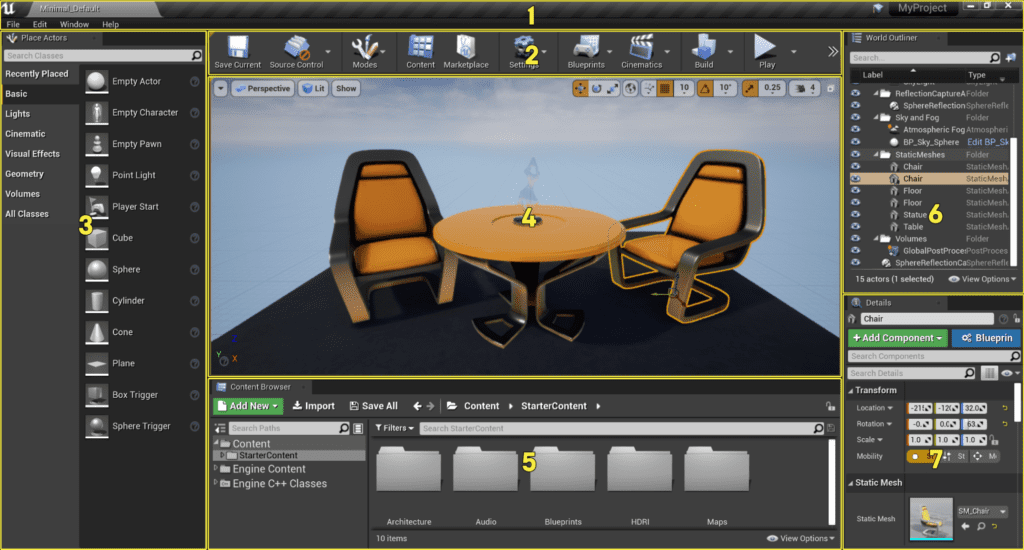 If we had to define the regions you see here, they include:

The tab bar is the area where the tabs are created for the window you are editing. It works like a web browser. It provides you with a fast control system.

There are many commands related to your project here. You can perform Unreal Engine management work here. In order to find out what it contains, it is useful to explore a little bit more here. Hover your mouse over the item you are curious about and read the description.

Here you will find the items you will use the most. The “Play” button is located here, which you can use to preview your game.

Here is the area we will use the most in game development. This is the region of the world you will create and the area of the game. You can navigate inside by right-clicking with your mouse and using the WASD keys. 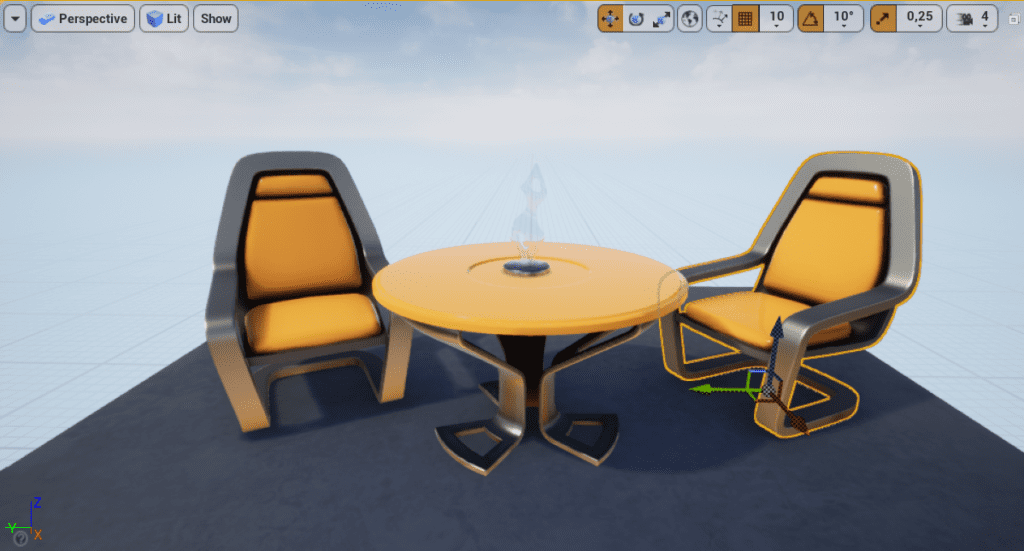 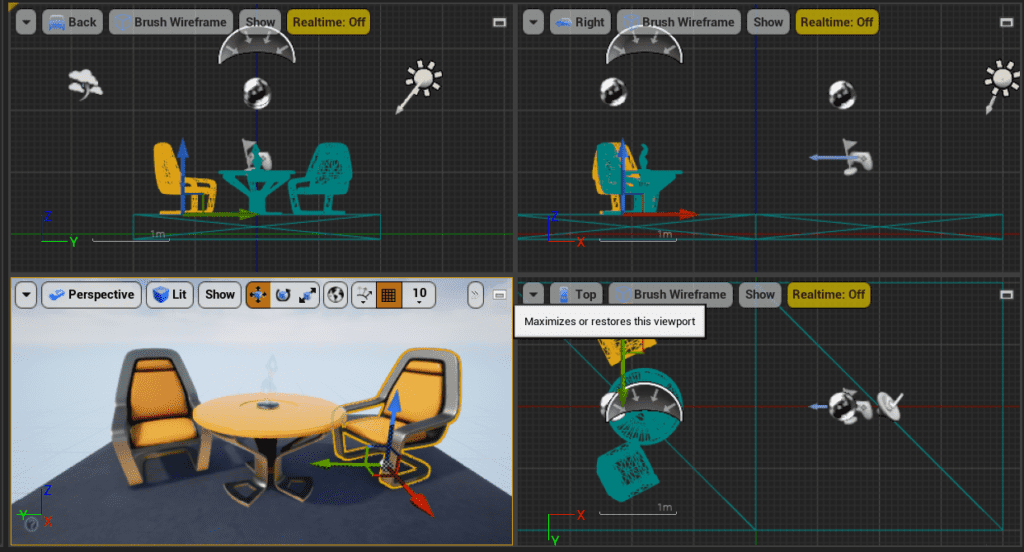 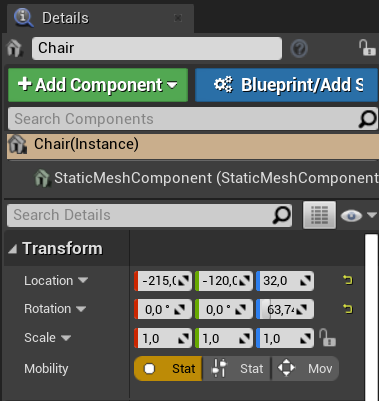 In this panel, you can see all the information about the current item. For example, the chair on the right in the photo above is selected and you can see the location information of the chair in the details panel.

At the same time, you can add rendering features, lighting, and, most important, components and scripts here. 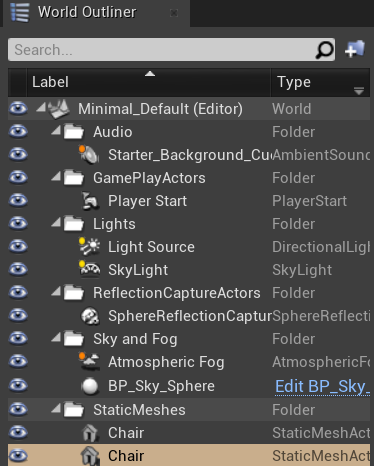 Here, you will find all the actors present in your play scene. Rather than looking for actors on the playing field, you can select them here and make the necessary changes.

Mastering the entire interface will depend on experience and time. For this, you should try to develop a lot of projects. This is the best way to gain experience with Unreal Engine.

First, let’s talk about what a Blueprint is. Blueprint is Unreal Engine’s visual programming language. The Blueprint system is built on C++. In this way, you can pass the code you want from C++ to Blueprint. Likewise, the opposite is possible.

Blueprint is especially ideal for creating various prototypes. C++’s long compiletime and complex settings make the process quite long. However, it is quite easy to get the hang of after learning the Blueprint logic.

If you don’t have previous C++ development experience, this can be quite daunting. Blueprint is much easier to learn, as it has drag-and-drop capability. Thanks to Blueprint, you can learn variables, classes, and functions in a much shorter time. After that, it will be easier to start learning C++.

Blueprint works pretty quickly depending on your project. However, the large number of loops and the increased complexity of the structures inside these loops can cause performance problems. Instead of developing complex projects with Blueprint, using both C++ and Blueprint will save time and work.

If we need to talk about how the scripting feature works, it can best be described as follows. We talked about the World Outliner panel. Suppose there are 2 cubes in this panel. We want one of the cubes to constantly move left and right, and the other to be moved by the player. Our goal in the game is to hit the constantly moving cube.

What we need to think about now is our route to go. For this, we need to select one of the cubes in the World Outliner panel and add a Blueprint or C++ script to it. Suppose we are developing with C++. We must encode the movement commands required for this cube and the input commands to be entered by the player. Our first cube is ready to be moved.

We should add a C++ script to our other cube and write code so that it can move left and right continuously.

Finally, we need a script to follow the collision system. We can add this anywhere. Because we will be able to call it from any place we add. Inside this script, there will be code that will monitor for when both cubes collide. If both cubes are in the same coordinate, we can make a rule such as “destroy one of the cubes” or “add 10 points to the score”. It’s totally up to the developer what happens.

It’s a simple example, but I’m sure you understand how to use the scripting feature.

In this game development tutorial, you learned how to install the Unreal Engine, how to start a new game project, and the differences between Blueprint and C++. At the same time, you learned about Unreal Engine’s interface.

Game development is a field that requires a lot of hard work and experience. Unreal Engine is a really successful game engine in this field. Choosing this engine for development is a great decision. But there is a long – and fun road – to travel in your game dev adventure.

Be sure to check out the documentation on Unreal Engine’s official website. Here you will find various demo projects, Blueprint structures, C++ algorithms, and more. Explore features like Sharing, Rendering, and Raytracing.