As might be expected, the hiring trends for developers are changing. Here’s how to keep abreast of the differences from years past to today.

If you’ve been working as a developer for more than a couple of years, you might have noticed that the job market seems to be evolving. Demand for programmers is still high, but the companies doing the hiring seem to be a little different than in years past.

Online job information hub Glassdoor recently conducted research examining how software jobs have changed between 2012 and 2017. And, the company’s findings challenge some of the traditional wisdom about where developers should be looking for jobs.

Additional analysis of data available from Dice.com and Robert Half Technology revealed other changes in salaries, bonuses, and the types of job skills employers are looking for.

The slides that follow cover ten ways that developer hiring has changed over the last five years. 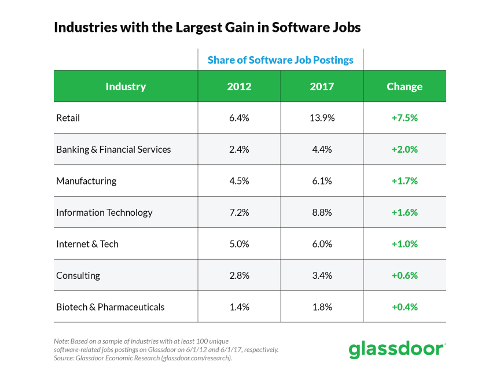 You might think that the best place to find a job as a developer is at a technology company. That might have been true once upon a time, but these days a lot of the software jobs are in industries outside the technology industry. For example, in 2012, retailers accounted for just 6.4 percent of all software jobs. But in 2017, retailers had 13.9 percent of the software jobs, making it by far the fastest-growing industry for job titles like software developer, software engineer, and so forth. Other fast-growing industries included banking and manufacturing. The truism that “every company is a software company” seems to be particularly true for these segments of the economy. 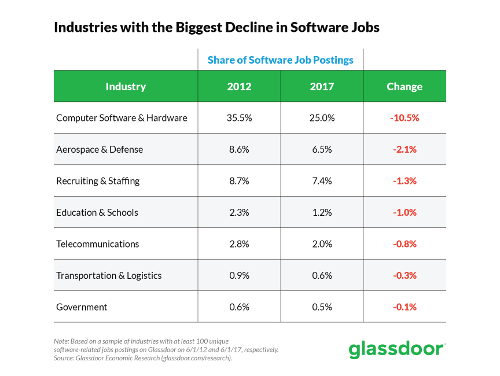 On the other hand, the Glassdoor research also revealed that some industries are offering far fewer software jobs than they used to. The biggest change is at computer software and hardware companies. Although they used to have more than a third of the software jobs, that has fallen to just a quarter, a 10.5 percent drop over five years. Other industries hiring fewer software professionals include aerospace and defense and recruiting and staffing firms—both of which have traditionally hired a lot of developers. That means developers who want to find new positions might want to branch out beyond the companies that have historically employed a lot of programmers. 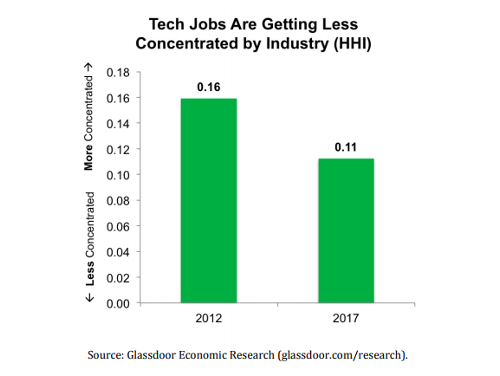 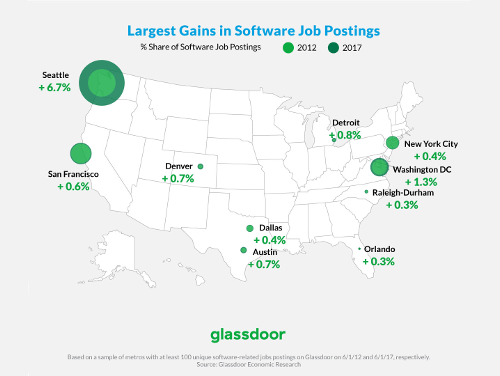 The conventional wisdom for job-hunting developers is to move to Silicon Valley because that’s where all the software jobs are. However, the Glassdoor study reveals that this is no longer as true as it once was. The biggest change has been in Seattle. Thanks in part to employers like Microsoft and Amazon, the city now accounts for 16.9 percent of all software jobs, up from 10.2 percent in 2012. Washington, D.C., also made some big gains. But, the biggest surprise might be that the third fastest-growing market for software jobs is Detroit, Michigan. Automotive companies are looking for developers to help build connected cars, which means more software jobs in the Motor City. 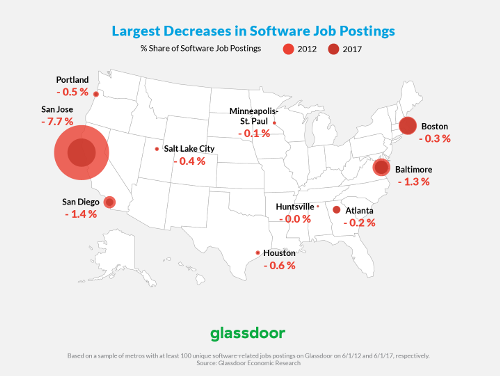 Many of those job gains in cities like Seattle, Washington, and Detroit have come at the expense of Silicon Valley. San Jose, in the heart of Silicon Valley, accounted for 15.8 percent of the software jobs in 2012 but only 8.1 percent in 2017. That means Seattle, with its 16.9 percent share, currently has a larger share of the software jobs than San Jose. San Diego and Baltimore have also seen significant decreases, but the rest of the cities losing software development jobs saw decreases below 1 percent. However, Boston’s drop from 5.2 percent of the jobs to 4.8 percent also seems significant because of that city’s high developer population. The types of IT jobs employers are trying to fill has also changed somewhat over the last five years. In 2012, mobile developers were in high demand, coming in second on the list, but they don’t even make the top five in 2017. Java and .NET have decreased in importance, while security has become more important, likely in response to the flood of high-profile breaches at well-known companies. In addition, DevOps, which wasn’t on the radar five years ago, now comes in at number four, demonstrating how important the approach has become for enterprise developers. 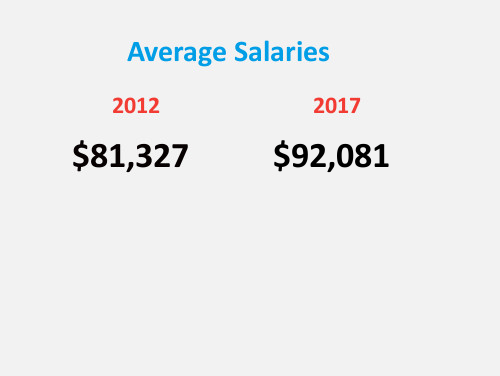 Given the high demand and low unemployment among technology workers, it’s not that surprising that the average technology salary is significantly higher in 2017 than in 2012. According to Dice.com, the average was $81,327 in 2012, climbing 13.2 percent to $92,081 for 2017. However, the average technology salary in 2016 was $93,328, meaning that developers and other IT workers saw a slight pay decrease in 2017. That’s highly unusual. Even during the recession of 2008, IT salaries continued on an upward trajectory. 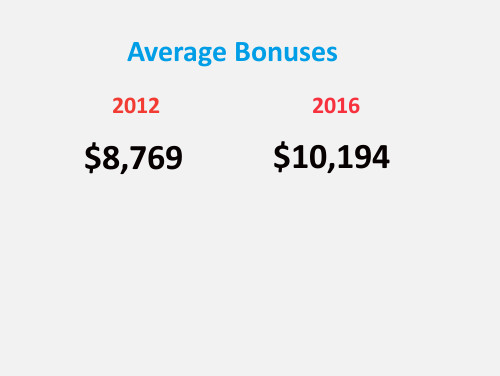 Dice doesn’t yet have bonus data available for 2017 (after all, most workers receive their bonuses at the end of the year), but in 2016, the average bonus for technology workers was $10,194. That was 16.2 percent higher than in 2012. The press release on the topic noted, “Over time, bonuses have become more commonplace in the tech industry,” and in 2016, 37 percent of technology workers received a bonus. 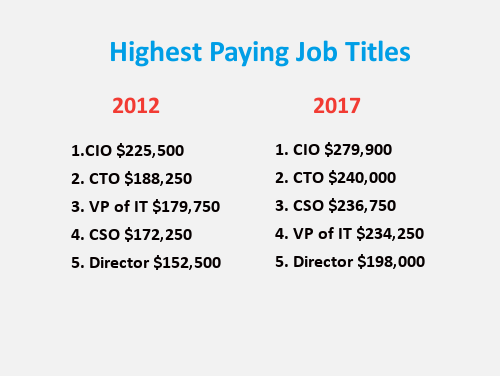 One thing that hasn’t changed a lot in the last five years is the IT job titles with the highest paychecks. Developers continue to be well compensated, but their salaries can’t compare with those paid to executives at the top of the food chain. The same five executive titles that topped the list in 2012 are still in the top five in 2017. The one noteworthy change is that chief security officers now tend to be better compensated than vice presidents of IT, likely another nod to the growing importance of security. 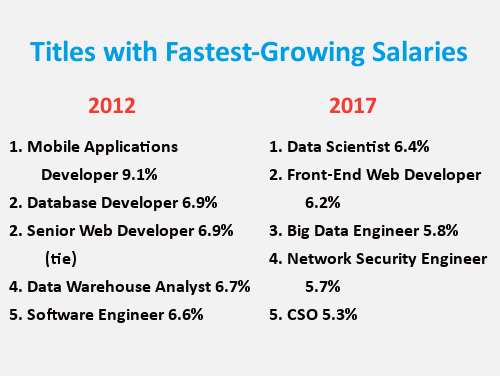 10. Job Titles with the Fastest-Growing Salaries

There was far more movement when you look at the job titles that had the biggest salary increases in 2012 compared to those with experiencing big increases in 2017. In fact, none of the titles on the two lists are the same. Back in 2012, mobile developers saw a whopping 9.1 percent increase in average salary, but they didn’t make the list in 2017. Instead, data scientists top the chart with a 6.4 percent increase. And, in keeping with other hiring trends, two of the IT job titles with the biggest increases for 2017 are related to security, whereas security didn’t make the list five years ago.