For developers, cloud databases offer a number of advantages. First, databases in the cloud are highly scalable, making it easy to grow as demand increases. Second, choosing a public cloud provider takes away a lot of the management burden. This is particularly helpful for those working on DevOps teams where the developers are responsible for many of the infrastructure administration tasks. Third, the cloud pricing model allows developers to pay only for the amount of resources they need. Many of the cloud databases even offer free tiers, which make it easy for startups to get their applications up and running inexpensively.

In the past, many developers had concerns about the security of cloud databases, but the public cloud providers have responded by incorporating more security features, including encryption, into their offerings. For some, flexibility and vendor lock-in have also been concerns, but in this area, too, service providers have been making improvements.

Before selecting any cloud database, developers would do well to examine all of the features, pricing and uptime guarantees of the services they are considering. For this slideshow, we put together a list of ten of the best-known cloud databases for developers. It includes both SQL and NoSQL options that can suit a wide variety of different applications. These are ten of the most well-known cloud databases that developers can use today. For developers looking for a NoSQL option, AWS offers DynamoDB. It boasts fast performance with “single-digit millisecond latency at any scale.” It can integrate with other Amazon cloud computing services like Lambda and Identity and Access Management (IAM), and it supports both document and key-value data structures. The website includes links to a number of case studies that show how companies have used DynamoDB to power their mobile, Web, IoT or other applications. Like Amazon, the Microsoft Azure cloud computing service also offers both SQL and NoSQL databases in the cloud. The not-so-cleverly-named SQL Database is the relational database service. Key features of the offering include automated tuning, scalability without downtime, multitenancy capabilities, support for most development tools and built-in security protections. Microsoft’s NoSQL cloud database service is called DocumentDB. It comes with a guarantee of less than 10 millisecond latencies on reads and less than 15 millisecond latencies on writes for at least 99 percent of requests. Microsoft also boasts that the service offers limitless scalability, global replication capabilities, the ability to query the database using SQL or JavaScript, and four options for consistency: strong, bounded staleness, session and eventual. 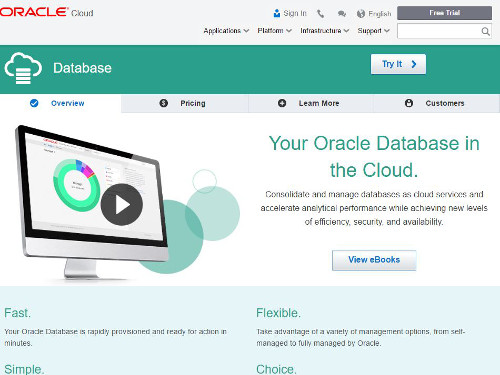 7. Oracle Cloud Database as a Service

Many enterprise developers already have experience with Oracle databases in their data centers, and Oracle also offers its database technology on software as a service (SaaS) basis. The company says that with its Cloud Database as a Service developers can have their database ready to use within just minutes. In order to give developers the flexibility they need, Oracle offers a variety of management options, database editions and virtualization choices. IBM’s DB2 database is also popular with enterprises and comes in a cloud version available through the BlueMix platform as a service. IBM DB2 on Cloud runs on IBM’s SoftLayer cloud computing infrastructure and speeds the time required to provision and deploy the database. It comes pre-configured for transactional workloads but can also be configured for analytics or mixed workloads. Built on the open source OpenStack cloud computing platform, Rackspace Cloud Databases are fully managed and performance-optimized. Developers can choose among MySQL, Percona Server or MariaDB for the database engine, and the company claims that they can get up and running in just minutes. Rackspace also offers round-the-clock support and easy access to experts who can assist with tasks like replication, high availability, backups and database optimization.